My Iron Butt adventure began about 10 years ago. I found Hoagy’s Heroes, saw what it was all about. I thought, now I like this idea. As Hoagy says how many times do you get do something you enjoy & help kids at the same time. Unfortunately the bike I had at the time was not up for the challenge. Now here it is 2016 I have a different bike a 1988 Yamaha Venture. 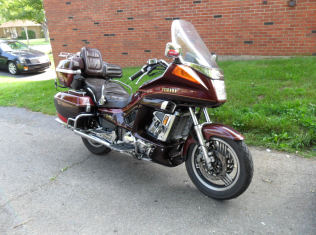 So in April I sign up for an in state Ohio ss1000. So here I am all excited about doing my ride on June 10th Now being a truck driver i have to take a yearly physical. I found out at my physical that because of the fact that I have an 18 inch neck (My neck size hasn't changed since I was 18 playing football in high school) I have to have a sleep study done on 10th of June. I had to postpone my ride. Turns out I have sleep apnea. I couldn't work for 2 months. When I got back to work I rescheduled my ride for September 25th. I go to work at 4am. So the night before I decided to treat it like a normal day.

My alarm went off at 3am I showered and got the bike out of the garage. Went to the nearest gas station got my starting time & receipt & off I go. Everything was going great. I was making pretty good time and bike was running awesome. I was feeling great. I got about 850 or so miles in when I started feeling my left leg twinge like it was going to cramp. My choices are keep going. Or at where I was on the route cut it short & head for home. I didn’t feel it was safe to continue. So I headed home it was only about 55-60 miles home.

As it turns out by the time I got home, my leg never did cramp and I had rode 920 of the 1000 miles ugh. But the way I was feeling, I stand by my decision. I was talking to Hoagy about it a day or so after. He told me not everyday is a good day for an Iron Butt ride. I went to try it again 2 weeks later. But when I went to check my bike. I found a puddle of oil under the right fork tube. Now here we are in January and I am in the process of getting the seals replaced in the bike. I'll try again hopefully in April or May this year.