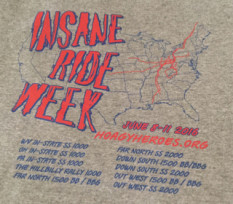 The name has a certain ring to it. When I talk about the enjoyment I get from spending long hours in the saddle (sit there, twist that), some of my friends – and my entire family, think I am nuts. So, when Hoagy Carmichael announced an event that offered three days of rides in June 2016, I penciled in the dates on my calendar. 2016 would be the year that I made it to Glen Dale, WV and meet many wonderful people who share the allure of long-distance riding.

On Tuesday, June 7, I rode to Heroes’ Haven, the center of the week’s activities, to complete waiver forms, meet some of the riders and support staff, and get some delectable grub before checking into the event hotel and grabbing some shuteye.

Early Wednesday morning I started off on the first of three saddle sore rides. Today I would be riding 1,000 miles within the borders of the Buckeye State. The weather was good as were the roads and the traffic. The only issue I encountered was riding around Toledo, where major road construction made a mess of things. I arrived back at the hotel by 8:00 PM. Dinner, a cold libation, a hot shower and off to sleep.

I hopped out of bed Thursday morning, ready to tackle day two of riding. Thursday would be spent riding throughout the Keystone state. Once more, good weather was on tap. Not too hot. Not too cold. Just right! On the way to Erie I spotted a dead brown bear on the shoulder of the road. Boy, it would have sucked to have hit him. With the exception of a traffic tie-up on I-80 in central PA, the ride relaxing and enjoyable. Once more, the evening ritual was observed arriving back at the hotel. Banter, beer, bed.

Originally, I planned on riding the Mountain State on Friday, however, Hoagy convinced me that the Hillbilly 1000 should not be missed – so, come Friday morning, onward to the Hillbilly 1000 I go. This route led riders through portions of Ohio, Kentucky, Tennessee, North Carolina, Virginia and West Virginia. It was a fun ride, requiring riders to take photos of listed attractions. The weather continued to cooperate. There was no rain but there was plenty of heat, especially going across Kentucky on I-64. Arriving back at the hotel Friday night, many riders gathered to discuss their riding experiences over an assortment of cold beverages. 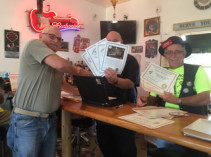 Saturday was set aside to catch up on sleep and relax prior to the wrap-up event at Heroes’ Haven later in the afternoon and evening. Hoagy, his effervescent wife Amy, Chef Jeff and numerous volunteers put on a fun certification party with IBA President Michael Kneebone presenting certificates to the riders.

While you can ride anywhere and anytime, I encourage you to take part in a Hoagy’s Heroes event. Make new friends, raise money for childrens’ charities and have fun riding. A true trifecta!