For most experienced long distance motorcycle riders and Iron Butt Veterans, much of what I am about to say will not be a surprise, but may be helpful for other newcomers to long distance riding.

No matter if you’re a newcomer or a seasoned pro, you will not forget the experience of riding 1000 miles within 24 hours. This is the story of my experience while riding my first (non-official) long distance ride with Hoagy Carmichael.

In the spring of 2008, I purchase a Kawasaki Ninja 250. I soon found myself riding places that I have never been before. The longest ride to date was 600 miles of mostly rural roads with some interstate miles. I began searching the internet for some local riding clubs and other people who enjoyed long distance riding. I became a member of the local CMA (Christian Motorcycle Association) and rode some rides with them. The CMA and other riding groups are great for people who want to stay nearby and support local riding, however, the thrill of long distance riding was missing. I searched the internet for long distance riding groups located in my vicinity. My search brought me to the web site www.hoagysheroes.org, a long distance charity riding group which supports afflicted and less fortunate individuals who are in need. After looking at the website, I composed an email stating that I was interested in participating with the Hoagy’s Heroes riding group. The following day, I received a response from Hoagy Carmichael himself. Hoagy warmly greeted me and invited me to meet and talk about long distance riding and the activities of Hoagy’s Heroes. Within a week we made phone contact and began talking about future rides which are posted on the website. I became aware that most long distance riders rode larger motorcycles like Harley's, Gold Wings, and BMW's. Hoagy laughed and said “I would not ride that bike, but you can if you have enough stamina and endurance”. I quickly began to modify my little 250 ninja to make it into a sport/touring motorcycle by ordering a touring windshield, cruise control, and mounting a GPS unit. I also needed a new set of tires and a rack system to hold my luggage. I became so preoccupied with transforming my motorcycle and learning everything I could about long distance riding, that I totally confused the dates of the upcoming ride. The Hillbilly 1000 Saddle Sore was scheduled for June 27, 2009 which is an in-state West Virginia IBA world record ride. The June 7, 2009 ride is a non-official charity ride contributing to Appalachian Outreach, Inc. While talking to Hoagy on the phone, I confused the two upcoming rides and said “I’m so excited to ride the Hillbilly ride this weekend”. Hoagy responded, “The ride is not this weekend but scheduled for June 27th”.

Being so excited and wanting to ride, Hoagy invited me to ride with him on the Appalachian Outreach, but first he thoroughly asked me questions and wanted to know my level of riding ability. He said it is 90% attitude and the rest is ability to complete a ride like this. After the onslaught of questions and promising him not to do anything stupid, Hoagy wanted to meet me in person and show me where he lived. The little Ninja needed a new set of tires, so I was able to get new tires inflated with nitrogen gas and met Hoagy all in the same day.

Everything was planned and scheduled to leave from Moundsville, WV at 2am on June 7th 2009. 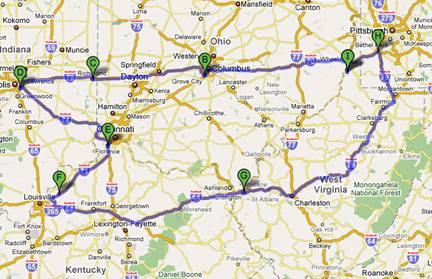 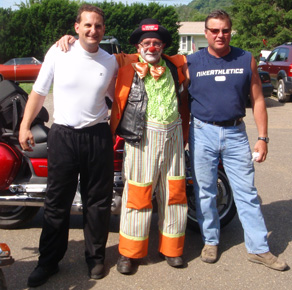 upcoming 1000 miles. We met Bobby, riding a Gold Wing, at the local gas station. After filling up with gas and getting our receipts which showed the time (2am), location and amount of fuel, we started our march towards 1000 miles. FYI -Hoagy’s stops are quick so be ready when he saddles up. This is a good time to try to describe Hoagy Carmichael. Hoagy is a unique individual. After meeting him once, you will not forget him. It doesn't matter if he is dressed up as Hoagy the Hobo or without the costume.

This is the face of an extremely friendly and warm individual. In short, he is a people person. It doesn’t matter who you are, he will always leave you feeling better than when you arrived. Even on a motorcycle traveling at speed, his personality shines through to passing cars and onlookers. No matter where he goes, Hoagy will always leave you better than you were. And when he leaves, you will know it. The sound of the Harley and the colors of his garb quickly advance to next traveling vehicle and curious onlooker.

Back to the ride: We were traveling on I-70 west. The little Ninja 250 is tucked in between a Harley and a Gold Wing. The pace is set by Hoagy, while Bobby is prompting me to keep close. The moon was full and I quickly found myself struggling to keep my helmet in place. The force of the air was causing my helmet to ride high on my head. We traveled approximately 170 miles before stopping to refuel. I found out that my helmet was too large, so Bobby gave me an insert to make the helmet fit snugly. By this time, Hoagy was riding around the gas pumps blowing his air horn and saying “Lock and Load em…. Let’s go!” Back on Interstate I-70 westbound, next stop in another 170 miles. This stop was a little longer due to the restroom situation. There was a bunch of women outside the women’s bathroom door. I didn’t think why, so I proceeded to go into men’s restroom. I opened the door and to our eyes’ surprise, we saw Hoagy standing in front of the urinal. I froze with the door open wide, while the women looked and laughed. I quickly closed the door while the women were laughing and asking questions about Hoagy and the ride. The gas stop took much longer than planned, so we knew we needed to pick up the pace.

Back on the interstate, it was now almost dawn. The low lying fog and dew was a sight to see. The cool night was behind us as we pushed forward around Indianapolis, Indiana. We stopped another time or two and quickly refueled. The lost time was quickly recovered by the pace of our leader. The GPS unit was keeping track of our average traveling speed. All I can say is we were at a pace of a Bun Burner Gold, which is 1500 miles in 24 hrs. After the fuel stop we proceeded and followed our leader. I noticed that the direction had change from the previous planned route. I didn’t question it, but just kept pace with our leader. Traveling approximately 5 miles, Bobby communicated with Hoagy via the C.B. and told Hoagy we were going the wrong way. We stopped at the next exit and quickly got back to the planned route. Even seasoned veterans can make a rare error in direction.

The miles and the views kept coming and going. The sights were amazing, and the weather was perfect. We were slicing and dicing the highways of Ohio, Kentucky, and West Virginia. One more stop in Gassaway, West Virginia and we will be back home in Moundsville. Hoagy was meeting and greeting everyone he saw, he even called one of his nearby friends. Hoagy knows people from everywhere. Now we had enough gas to make it back to Moundsville, WV without stopping again. Pressing forward and having fun at it, at each passing exit Hoagy would encourage us with a tomahawk motion of his arm and hand. Moundsville was almost within sight and Hoagy pulls over to take a picture of the GPS display. I told Hoagy that the GPS information got reset by an in advert mishap while using the unit. I was so upset that we did not have the total mileage, average miles per hour, and other trip information. I apologized and we proceeded to the Appalachian Outreach festival where were warmly greeted by the event host. It was now around 5pm Sunday June 7th. We all got a plate full of food and some water to help nourish our tired bodies.

After a few conversations and listening to the planned entertainment, Hoagy took center stage. Hoagy addressed the crowd in his costume and explained all about Hoagy’s Heroes, the benefits of contributions, and gave an inspiring short talk about the times we are now living in. He encouraged the crowd to keep a positive attitude in everything we do, no matter what it is. This is the heart of a man who purposefully gets up at 2am, dresses like a hobo, and rides 1000 miles all for the benefit of others and charity.

At the close of the event, we oiled up our chains and headed towards home. My little 250 Ninja was up to the job, ready for the next long distance ride. After 8+ hours of rest and a little bit of stretching of the arms and legs, I am looking forward to the next ride.
So, if you’re a newbie like me, or a seasoned veteran, you can contribute to a great cause while enjoying the ride along the way.
As Hoagy Carmichael would say “Keep them Locked and Loaded”….Go Ride……..