Story by: James D. Musgrave
Hello everyone, I just completed my second IBA sponsored Iron Butt 1000 miles in 24 hours ride on June 27th, 2009. I completed this ride in 17 hours and 1 minute flat. The ride was organized by Hoagy's Heroes Organization and took place entirely in the State of West Virginia. I would like to share some of my favorite experiences with other riders who may be thinking about doing a IBA ride and say thanks to the outstanding organizers, Hoagy's Heroes.

I first met up with Hoagy at the Holiday Inn Express in Morgantown located almost across the street from Triple S Harley Davidson, where the ride started. Let me say from the first hello, it was all hugs, handshakes and smiles. I was quite impressed with Hoagy's concern to meet and know all the participants by name. His appreciation for the riders was obvious because of his ability to address the riders by name throughout the ride. It was apparent all of Hoagy's staff, mostly family volunteers, had a true dedication to the cause they were helping out with. The entire staff was so very friendly and went out of their way to answer all questions. Everyone associated with Hoagy's staff including Hoagy himself, definitely has earned the Hero in Hoagy's Heroes. 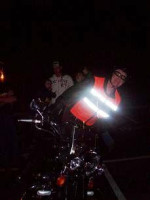 This Iron Butt ride group was smaller than the last ride I participated in (April 2009). I think that is why I enjoyed it so much more. I met a great bunch of riders from the experienced IBA riders to the first timers. Everyone I met tried to welcome each other and shared interesting stories. West Virginia is where I was born and raised and it will always be home in my heart. Besides contributions and profits from this ride being donated to Children of Fallen Soldiers Relief Fund, I wanted to complete an IBA ride in my home state.

Other than some road spray due to an earlier rain shower close to Summersville, WV on US RT19, the weather was exceptional. It was nothing but sunshine and clear sky's throughout the entire ride. One thing about riding your motorcycle in West Virginia, the scenery is breathtaking and the curves in the roads were made for riding.

My favorite time on this ride was a 30 mile stretch out of Charleston, WV towards Beckley, known as the West Virginia Turnpike, on a section of Interstate shared by both I 64 and I 77. I'm happy to say I crossed this section of highway three times because Charleston, WV was an intersecting point to all the Interstates and the intersecting point to the different legs traveled on the course. This section of highway had the hills and curves that definitely challenged the rider at Interstate speeds without being too difficult. Being centrally located, this stretch of road put the excitement back into the run just at the time you needed it. The only thing that would have made it better would be if the ride was scheduled for the Fall color change in the leaves.

I was not the only rider that was a first timer to ride in an event organized by Hoagy's Heroes. I met a fellow rider named 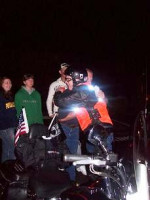 Marvin from Ohio. Not only was it his first time riding with Hoagy, it was his first IBA ride. We both hit it off right away and teamed up for the ride. Though Marvin and I spent the first leg of the ride trailing along with Hoagy's group, it was nice to break away from the pack and still know you had another rider with you, should something go wrong. In fact, a bunch of the riders became stuck up in Bluefield, WV because the gas stations that advertised to be open 24 hours were in fact not open 24 hours. I only bring this up because in my travels to find a gas station that
was open, I thought it was ironic I passed a store front called the Hillbilly Trading Post while participating in the Hillbilly 1000.

Hoagy gave the riders a tip in advance of the ride. He knew the West Virginia Turnpike was a toll road. He suggested the riders use plastic sandwich bags to hold the proper amount of change in a bag for each toll booth. The bags made it easier to control the change and quickly pass it along to the toll booth operator. Most of the riders took Hoagy up on his suggestion. There were three toll booths along one pass of the West Virginia Turnpike. Each of the riders made four passes past each toll booth. If you can imagine, twelve times each rider gave a toll booth attendant a $1.25 bag of change. At first the operators seemed a little annoyed and confused as to why they were receiving so many bags of pre-counted change. As the day went on and all the bikers kept handing out bags of change, the toll operators started asking questions. By the last pass, the word had spread between the toll operators of our ride. It actually seemed as if they were enjoying the little bags of change and were passing along well wishes to all the riders.

I hope to participate in future rides with this great organization. What more can you ask for, you get to ride your motorcycle with a great group of people and contribute to a worthy Hoagy's Heroes cause to benefit children.